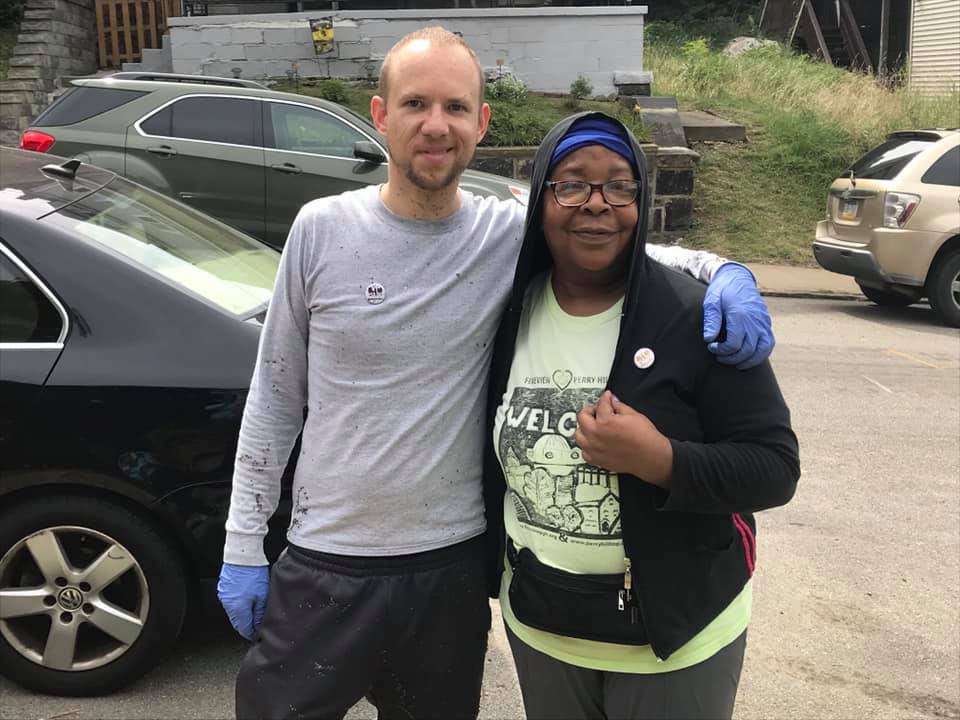 “You may not want to go and pick up garbage, but on your street, you can go and do something for others. It’s going to make where you live look better. And whatever you can do…do.”

As Fred Rogers famously serenaded “I have always wanted to have a neighbor just like you, I’ve always wanted to live in a neighborhood with you”, we’re pretty sure Miss Carla is the first person who comes to mind for our Northside fellows. From helping clean up the vacant lot next to our house on Burgess Street to spreading the PULSE mission to community members, Carla Arnold has quickly become someone our fellows and staff look up to as to how we can be good neighbors. A longtime resident of the Northside, Carla’s involvement grew into her becoming an AmeriCorps VISTA member with the Perry Hilltop/Fineview Citizens Council. The council works to invest in neighborhood properties and encourage residents to revive the business corridor and homes in Fineview and Perry South. These communities sit atop a hill in the Northside of the city and provide stunning views of downtown, abundant green space, and a number of locally owned businesses. As a longtime resident of the Northside, we sat down with Carla to learn more about her role with the citizens council and love for her community.

What is your role with the Perry Hilltop/Fineview Citizens Council?

I am their AmeriCorps VISTA member and I am responsible for community engagement. One of the projects I have worked on was surveying, that was part of the community plan. The main survey I did was at Allegheny Dwellings. I went door to door and asked people questions about what they would like to see in the community. Basically, it was engaging with residents to involve them with what we’re working on.

Have you seen an improvement in the involvement of these community members since completing the survey?

It’s about the same. It trickles in and I don’t know the trust factor, especially with Allegheny Dwellings. The trust isn’t there. You gotta keep working on that, you gotta keep calling, keep inviting them. But there is a trust issue because that community was left out for some time.

Both Perry Hilltop and Fineview Citizens Councils have just started back up in the last four years. They have always existed but they kind of fell by the wayside and weren’t active. They finally decided to get the community organizations back in full force. Now we’re just trying to gain people’s trust back.

Were you involved with the citizens council before this?

I only became involved in the last two years. The reason I got involved is because I started going to the church up here, Mosaic Community Church. Joanna, Executive Director of Perry Hilltop Citizens Council, went to church there as well. There were a couple of times I came to community meetings and got involved, Joanna started asking me to help with more initiatives.

What is the most rewarding part of your role?

Getting to know the people in the area a little bit more. You see people, you wave to people, but you never really sit down and talk to people. That’s what this role has afforded me to do.

Aside from being involved in the citizens council, you also live in the community.

What do you love about your community?

It’s always seemed like home. People don’t like the hills, but that’s just part of the neighborhood. And it’s kind of like being in the country out here.

What does it mean to you to be a good neighbor?

Being open to help. We know that everybody can’t do everything. That’s what I’m trying to convey to the people living around here. You may not want to go and pick up garbage, but on your street, you can go and do something for others. It’s going to make where you live look better. And whatever you can do…do.